How to Say YES to Life With Dr. Frankl 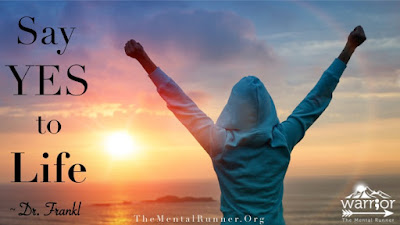 There are very few things that have altered the course of my life in as profound a way as Dr. Frankl’s book, Man’s Search For Meaning. When I think I just can't go on anymore, and that life has handed me a raw deal, I grab this book and devour it. In its pages, Dr. Frankl tells of his grim experiences in concentration camps, which led him to logotherapy (an existential method of psychiatry). His descriptions of life in those death camps and lessons for survival always inspire me. For three years he labored in four different camps, including Auschwitz, while his parents, brother, and pregnant wife all perished. He makes the argument that we cannot avoid suffering, but we can choose how to cope with it, find meaning in it, and move forward with renewed vigor. His theory, known as logotherapy, holds that our primary drive in life is not pleasure, but the discovery and pursuit of what is meaningful to each of us, as individuals. By, "saying yes to life in spite of everything," he demonstrates how to go about finding that meaning.

After losing his entire family and spending years in concentration camps, he was able to come up with remarkable solutions to life’s most vexing problems. While his compassion for humanity drips from the pages of this book, he did not allow for much self-pity. He believed in finding solutions. When no solutions could be found, he directed his patients and readers to find a meaning to the problem/suffering and move on. So be warned, when I read this the first time I felt as if I had been handed a new lease on life while being given a hug and swift kick up the backside, all at the same time. It just so happens that I often need all three.

What that means is this is not a new age self-help book that pats readers on the back with shallow motivation that fades a few weeks after reading. Dr. Frankl was both a psychiatrist and a neurologist. His vivid account of his ordeals and the heart-warming humanity he witnessed are coupled with verifiable data and case studies. He doesn’t sugarcoat anything. He is direct and honest. {That hasn't prevented his book from selling over twelve million copies and being voted as one of the top ten most influential books of all time in a survey done by the Library of Congress}.

One of my favorite examples of his honesty and directness occurred when a reporter asked him to describe the difference between psychoanalysis and logotherapy. The reporter had described psychoanalysis by stating, “During psychoanalysis, the patient must lie down on a couch and tell you things which sometimes are very disagreeable to tell.” In his typical straightforward, yet humorous way, Dr. Frankl replied, “Now, in logotherapy the patient may remain sitting erect but he must hear things which sometimes are very disagreeable to hear.”

Dr. Frankl helped me realize that while there are no cures for my conditions, there are ways to minimize symptoms and find meaning and purpose in them. I was forced to reanalyze my outlook/attitude towards my diagnoses. Thank goodness. As he did for so many others, Dr. Frankl helped save my life!

Instead of summarizing and giving my interpretations of his book, because I can in no way enhance his work, I am gong to give a few snippets that I love. I am hard pressed to find a wasted sentence in this book. There is no fluff. The following are simply a few examples of the many sentences that I have highlighted in all three copies I own. I had to buy a second copy because the pages were beginning to fall out of the first from reading it so many times. The third is a digital copy that I keep on my phone so that I can take it with me everywhere I go.

~As a professor in two fields, neurology and psychiatry, I am fully aware of the extent to which man is subject to biological, psychological and sociological conditions. But in addition to being a professor in two fields I am a survivor of four camps —concentration camps, that is—and as such I also bear witness to the unexpected extent to which man is capable of defying and braving even the worst conditions conceivable.

~We must never forget that we may also find meaning in life even when confronted with a hopeless situation, when facing a fate that cannot be changed. For what then matters is to bear witness to the uniquely human potential at its best, which is to transform a personal tragedy into a triumph, to turn one’s predicament into a human achievement. When we are no longer able to change a situation—just think of an incurable disease such as inoperable cancer—we are challenged to change ourselves.

~There is nothing in the world, I venture to say, that would so effectively help one to survive even the worst conditions as the knowledge that there is a meaning in one’s life. There is much wisdom in the words of Nietzsche: “He who has a why to live for can bear almost any how.”

~After all, “saying yes to life in spite of everything,” to use the phrase in which the title of a German book of mine is couched, presupposes that life is potentially meaningful under any conditions, even those which are most miserable.

~Even the helpless victim of a hopeless situation, facing a fate he cannot change, may rise above himself, may grow beyond himself, and by so doing change himself. He may turn a personal tragedy into a triumph.

~Man is not fully conditioned and determined but rather determines himself whether he gives in to conditions or stands up to them. In other words, man is ultimately self-determining. Man does not simply exist but always decides what his existence will be, what he will become in the next moment.

These few quotes from Man’s Search for Meaning in no way represent what the book stands for as a whole, neither do they offer up the personal accounts, data or solutions that are packed throughout its pages. My hope in putting them up is that they may rekindle someone’s spirit and lead others to read his work, not to summarize it in any way. That would be doing Dr. Frankl, a true hero of mine, a great disservice. The solutions, hope, empowerment and restored faith in ourselves and in humanity can be found in the book’s pages.

Receive A Weekly Update by email
Follow on: Twitter / Instagram / Facebook / Google+
(click links on left)
As always, I wish you wonderful mental health and great successes eating healthy meals. If you, or someone you love, is severely depressed or anxious, please click this link and you will be directed to the International Association for Suicide Prevention. It is a fantastic resource and is staffed by wonderful people.
Feel free to send your questions or comments to:
questions@thementalrunner.org 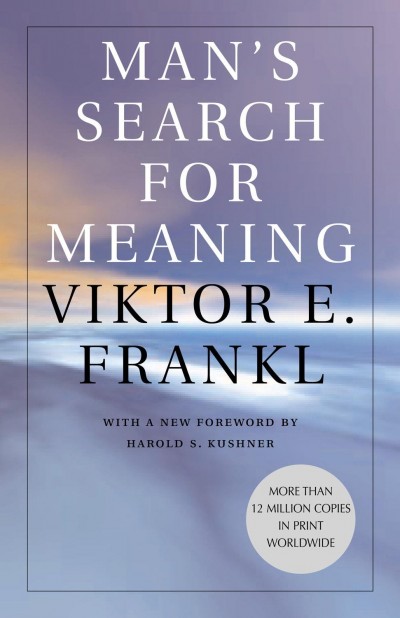