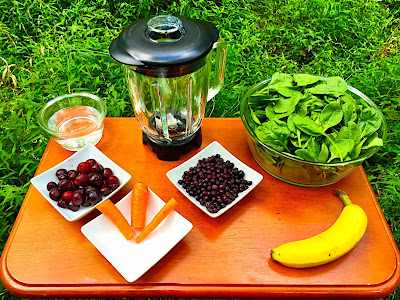 (This is a picture of my favorite green smoothie ingredients, which I snapped for this post today)

Many readers have requested a more specific list of what I eat daily. I don't like labeling myself. I'm am not a raw food person, a vegan, a vegetarian, a paleolithic eater or any other label that is out there. What I do is eat the healthiest foods that are available to me, as often as I possibly can. I have to keep it that simple. I do admire people who can live by a strict set of guidelines, and I see the benefits of doing so. With my conditions, however, I find that trying to live with those kind of restrictions only causes me headaches and heartaches. That means getting into the specifics of what I "always" or "never" eat becomes nearly impossible.

That being said, there is one type of food that I eat every day. I have yet to find an eating plan that doesn't consider this type of food healthy and beneficial, especially for mental health. I view this food source as a medicine, as much as any pill I have ever taken. The one thing I eat every day is dark green leafy vegetables. I do, however, have a confession to make. I don't like dark green leafy vegetables. In fact, I don't care for them at all.

I tried every way I could think of to get around the research that I kept coming across. Nearly every nutritional article written about how to reduce symptoms and improve health involved these vegetables, such as spinach and kale. There were some that involved fruits as well, but the overarching theme was whole produce. So, before I go into how I overcame my aversion to these vegetables, let me do as I always do, and give the science behind why I decided I must find a way to include them into my meal plans.

In the study, Antioxidants as potential therapeutics for neuropsychiatric disorders, it is stated, "Accumulating evidence indicates that oxidative free radicals play important roles in the pathophysiology of various neuropsychiatric disorders including schizophrenia, bipolar disorder, and major depression." That is an enormously broad statement on the importance of antioxidants for mental health.

There was a large study done by Canadian researchers entitled, The association between fruit and vegetable consumption and mental health disorders: evidence from five waves of a national survey of Canadians. It involved three hundred thousand people across the country. This is a snippet from the study, "In this large population-based study of Canadians, greater fruit and vegetable consumption was associated with lower odds of depression, psychological distress, self-reported mood and anxiety disorders and poor perceived mental health." Their conclusion was that, "A healthy diet comprised of a high intake of fruits and vegetables is rich in anti-oxidants, and consequently may dampen the detrimental effects of oxidative stress on mental health..."

I had originally hoped that I could simply bypass the dark green leafy vegetables by taking antioxidant pills. That does not seem to be the case. In the study, Fruit, vegetable, and antioxidant intakes are lower in older adults with depression, it was shown that only food sources of antioxidants were inversely associated with depression. That indicates that the form of the antioxidant, and how they are ingested, is crucial. The study reports, "These findings point to the importance of antioxidant food sources rather than dietary supplements." Interestingly, the researchers also pointed to the folate that is found in fruits and vegetables as being a major contributing factor to mental health. That is important.

In the study, Dietary pattern and depressive symptoms in middle age, it was concluded that, "In middle-aged participants, a processed food dietary pattern is a risk factor for CES-D depression 5 years later, whereas a whole food pattern is protective." The researchers associated this protection as coming from antioxidants and folate.

In another study, it was shown that participants with a low dietary folate intake had three times the risk of being diagnosed with depressive disorder as those with a higher folate intake. Again, it should be noted that the results from all of these tests were from whole food sources and not from supplements.

In a double blind placebo study (the gold standard of scientific studies) entitled Folic acid supplementation for prevention of mood disorders in young people at familial risk: a randomised, double blind, placebo controlled trial, the researchers found, "There was no evidence that it [folate] reduced the incidence of mood disorders compared to taking placebo." Their conclusion stated the result was due to the fact that, "Folate is a general term for a group of water soluble B vitamins, also known as B9 and is found in leafy vegetables like spinach. Folic Acid is the oxidized synthetic compound used in food fortification and dietary supplements." It seems clear that the source of the folate, and the antioxidants, needs to come from a whole food source.

I found mounds of data that all read just like what I listed above, but that meant I had a big problem. I knew I had to find a way to add these dark greens onto my plate, but I had no idea how to do it. I dislike them that much. Then I came across a recipe on the Mayo Clinic's website for a green smoothie. I was immediately intrigued. I had to try it. Here is a link to the recipe if anyone wants it: Mayo Clinic Green Smoothie. I was amazed at how much I liked it. I had my solution. I have tweaked the recipe many times to get it just the way I like it.


Since putting them into smoothies is the only way I can make myself eat these particular vegetables, I do add much more of them to the recipe now. Here is my favorite recipe, as pictured above: 8oz fresh spinach, 1 banana, 1 cup frozen blueberries, 1 cup frozen cherries, 1/2 cup frozen carrots, 2 cups water. I blend it until it's smooth. Cherries can be expensive and I only use them for recovery after a long run. Obviously, they can be replaced with a more affordable substitute. I should say that, like with most everything I do now, I had to work my way up to this point. I don't suggest anyone start with 8oz. of spinach.

I have found the effects of this type of smoothie to be astonishing. After only a couple of weeks, I noticed a significant difference. I also found that I could tell a marked difference the few times I was forced to miss one. I go to great lengths not to let that happen anymore.

I was lucky that I found this way of eating these vegetables. It seems that ingesting them this way can be even more beneficial than eating them in their whole form. In the study, Solubilization of carotenoids from carrot juice and spinach in lipid phases: I. Modeling the gastric lumen, it was demonstrated that 40 seconds in the average blender will break spinach down to a sub-cellular level. This is important because the nutrients can be absorbed and processed at a much higher level in this state.

A great example of that can be found in another study entitled, Bioavailability of folate from processed spinach in humans. Effect of food matrix and interaction with carotenoids. In this study people were fed a cup of spinach a day for three weeks. As was expected, their folate levels went up compared to the control group. Again, that level has been shown to have a direct correlation with mental health. That is wonderful news, of course, but the researchers took their study a step further. A third group of participants were fed spinach that was minced before it was served to them. Their folate absorption rate was twice as high as those who were given the spinach in its whole form. That is profound.

There are two caveats to this that I feel I should cover. First, it has been demonstrated that smoothies that are primarily made up of overly ripe fruits cause blood sugar to rise. So, if someone is a diabetic, or watching their sugar consumption, that should be factored in. Less fruit, that isn't overly ripe, and more greens seems to be the key to the healthiest smoothies. Also, if an overabundance of citrus fruit is used repeatedly, then there has been evidence of tooth enamel being weakened. I don't think anyone wants extra trips to the dentist if they can be avoided.

While this is not the exact list that has been so often requested, I do hope that giving my most important meal of the day is beneficial. Again, I eat the healthiest foods available to me, as often as possible, in whatever situation I find myself in. I keep it that simple. I believe that most people are educated enough to know what those foods are. The only steadfast rule I follow is to have a green smoothie every morning.

Receive A Weekly Update by email
Follow on: Twitter / Instagram / Facebook / Google+
(click links on left)
As always, I wish you wonderful mental health and great successes eating healthy meals. If you, or someone you love, is severely depressed or anxious, please click the link to the right and you will be directed to the International Association for Suicide Prevention. It is a great resource and is staffed by wonderful people.


Feel free to send your questions or comments to:
questions@thementalrunner.org 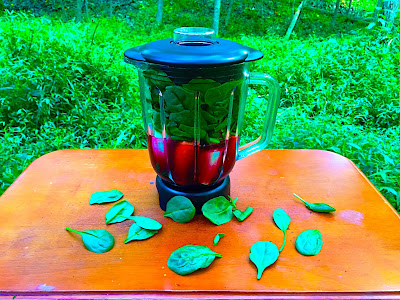